Eris Anthule is a high priestess who works tirelessly to ease the suffering of humanity. She herself is plagued with doubts after waking up without any memory of her past.

Eris is a leader for the Havencraft class.

Eris wants little more than the health and safety of others, always putting the issues of others above her own. She is very caring, and is somewhat understanding of how others act and why they do so.

Being a very peaceful and civil individual, she hates resorting to violence but is not above doing so, yet she fights only to injurefoes as opposed to killing them, as seen with the Countersolari guild; leaving them unconscious before they could take their own lives.

Due to having seeing the suffering of her world, she believes in a "Salvation" in which, the world finds happiness, no matter the method. This would become the reason that she summoned Nexus, albeit Eris wanted what she thought was the best for the world.

Under the control of Nexus, she displays cold emotion and little care for anything else than to bring "harmony" upon the land. However, after seeing the wills of the chosen ones and how the rejected Serenity, especially after her conversation with Urias Foremonde, she realizes the contradictions in her own logic and decides to save her cold world.

Originally she shows extreme determination towards her goals, undeterred by anything, but then, becomes a brooding, sad individual, looking for her own path.

Eris is haunted by her sins as a vessel and find herself lost at how to undo them. Some of her companions, Namely, Erika Summeragi, harbor a grudge against her for silencing their world, but she understands their attitude towards her.

Being much more civil than the others in the group, Eris often asks the motives of other characters and is puzzled by their resolution, as pure or twisted as it maybe and wishes she could resolve herself to something. she takes her sins upon herself and "gives life" as payment for what she's done.

After meeting Marlone and Major Meowskers, Eris finds a resolution in herself, to keep going and try to make amends for her sins.

For an undisclosed amount of time, Eris lived in a village, plagued by problems. Uncaring nobles, Famine, drought, people suffering due to various reasons. She prayed and prayed and found no answer. Until Nexus of Serenity, saw her as an adequate subordinate to "harmonize the world." Upon taking control of her, Eris wanders away from her ruined village and wakes up with no memory, except her name.

Having suffered from memory loss, Eris has no memory of her past whatsoever. Beckoned by her duplicate, Eris fights Shades and sees no one in the world. Upong seeing the morning star, something is stirred witihin her. During the first chapters of the Story Mode, she reunites with her duplicate and becomes an emotionless servant of Nexus.

During her time as a Servant of Nexus, Eris resolves to see how the world has been "saved" by her master and see her "salvation" through to the end. She is surprised, as to see the protagonists rejecting their dreams and desires and preferring the cruel, cold real world and fighting to the very end. She is especially distraught after her conversation with Urias Foremonde, who tells her arrogance and by extension, Nexus' was not asked for, as her concept of salvation is not the same for all and the world never asked for salvation anyway. Shaken, Eris lets Urias out of his dream and she understands her mistake.

Upon reuniting with the others, Erika doubts Eris' actions but Eris herself understands her own sin. With the help of a stranger, Yuwan, the reach the morning star and confront Nexus. Eris understands her mistakes and to make amends helps the protagonists in the battle. After a hard battle, Nexus Escapes and the world is left in grim silence. Yuwan however, gives them a dimension crossing portal which travels to other worlds, the protagonists chase after Nexus and upon doing so, Eris finds herself in an unknown country, prosperous and full of water, named Izunia.

As the war escalate, the citizen of Izunia are put in the crossfire. This interrupt Arisa and Erika fight. Just then Eris comes and tells both of them to stop fighting with each other. Erika refuse to back down and warns both of them not to get in her way.

After Erika left, Arisa suggest they regroup with the Bladeright. As the two ladies regroup they fond Setus and ask for answer. Setus tells them he was just as confuse as they are and sould had to the Bladeright HQ and get the answer from the Marshal. Just as they are about to head to Bladeright HQ. They heard an explosion that came from Eschamali. Eris worry about Marlone, Arisa tells her to go.

As Eris reach Eschamali. She witness a Bladeright killing a Countersolari and ask them why they are doing this and force her way in. Eris finds Marlone surrounded by Countersolari which he took care of. Eris ask Marlone for answers and he tells her that Countersolari was once part of the Bladeright and where getting revenge. Marlone admitted that this was inevitable which sadden Eris. Just then a Bladeright shows up and Eris ask why they are at Eschamali if they are after Countersolari. Urias shows up and ask Marlone for the fifth great warrior which confuse Marlone. After both Eris and Urias dealt with the Bladeright Urias demands answers. Eris defend Marlone but was easily push to the side by Urias. Marlone done with playing dumb and tells Urais to found the Bladeright Marshal for answers. Marlone then question why Urais fight. Urias finally done talking to him and left. As Marlone helps Eris up, more Bladeright shows up and forces the two to fight.

Eris notices how the Bladeright are similar shades. As more Bladeright shows up Rowen and Luna arrives. Rowen tells everyone to leave Eschamali something happens to Marlone. Eris what's answer and Marlone tells her Rowen and Luna that his body can no longer control his magic and is about to die. As more Bladeright shows up Marlone tells them to go stop this war and save Nicola. The three reluctantly leaves. Marlone no longer in control explode.

As Eris, Rowen, and Luna are heading to the hill. Eris not sure why Rowen, and Luna tells her about Nicola. As they are surrounded by the Bladeright Setus shows up to help. Not sure if the Setus is an ally of foe Setus tells them he is also trying  to stop the war and left. Luna worries about Nicola after Marlone death and runs ahead. Rowen and Eris then notice Erika heading to the hill as well. Before the two can continue more Bladeright appear.

Erika made it to the hill sees Leod fighting Maisha and join in. Maisha reveal her real motive is to summon the keeper Nerva and waited for the right opportunity. As Maisha is about to kill Eriak Leod sacrifice himself to save Erika. With leod dead Maisha takes his sword. Leod final words to Erika is that she looks like his deceased daughter and live. Setus shows up to stop Maisha and get defeat. Before Maisha and Erika can continue there fight, Arisa, Yuwan, Rowen, and Eris shows up. Arisa demands to know know if Maisha is the mastermind which she confirm that she is. As they all attempt to stop Maisha she easily push them aside and left. Erika crying over Leod death is help by Arisa, Eris, and Rowen back on her feet. Setus still alive wants to stop Maisha. Just the Luna finally arrives to see Nicola on the ground not sure if he is still alive.

Eris and everyone chase after Maisha and reunite with Urias and Isabelle only to surround by the Bladeright. Yuwan figure out that the Bladeright are actually being control by Maisha which angers Arisa. Isabelle finds out who the mastermind is realize her friend Eleanor is in danger. Arisa what's to found Luna only to told by Rowen and Isabelle to priorities stopping Maisha first. Feeling down Eris comforts her. Back at the hill Luna crying over death of everyone see knows and being attack by the Bladeright.

As Eris and everyone reach Eleanor, Maisha shows up. Yuwan and Arisa demands to know why she did all did this. Maisha tells them she what's to summon the keeper Nerva. Setus shows up stop her only to be surrounded by Maisha's Bladeright. As everyone except Urias is wounded from all the fighting Maisha escape. Just the Luna and Nicola shows up to help. With no end Maisha's Bladeright Nicola and Eleanor stays behind. Setus, Arisa and everyone else chase after Maisha.

As Eris and everyone catch up to Maisha they all attack her. Maisha repel them all with Leod's Sword the Truth Moon. As they fight Arisa tells Maisha she has decide to take her down. The fight continue Nicola and Eleanor shows up to help. As Nicola gives the finishing blow, Setus stops him. This startle everyone even Maisha as he tells them all that he loves Maisha. Setus then tells everyone that he has a responsibility as a Bladeright kills Maisha and declare himself as the new Marshal of the Bladeright. With Maisha dead the war is over.

With everyone else finish saying their goodbye to the friends they made and are ready to go to the next world when a strange women appear form another word asking for help.

The strange women introduce herself as Tetra and her home world Aiolon is danger of a tyrant name Belphomet and needs help. Everyone agrees to go Aiolon. Unknown to everyone not all of them will go to  Aiolon. Only Isabelle, Luna, Urias, and Yuwan along with Tetra made it to Aiolon. Arisa, Erika, Eris, and Rowen ended up at Naterra.

Eris's spirit appears before Mauro Aberald in Episode 32, entrusting him with the Legendary Card.

Eris appears in Episode 43. When Mauro is transported from his dream world to the world of her Legendary Card, he wakes up in Eris's church. After a conversation in which they conclude that they are inside a dream, Mauro faces Eris in a Shadowverse battle to return to his own world. During the battle, Mauro understands the importance of his companions and his willingness to keep moving on.

In the anime, Eris uses a Heavencraft deck.

A deck sleeve with Eris

A deck sleeve with Eris

A profile flair with Eris

A profile flair with Eris

A profile flair with Eris
Eriselblem.png
An emblem with Eris 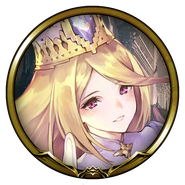